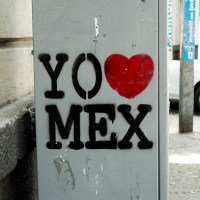 Mexico is a hub for asylum seekers and vulnerable families. So you might think that the US-Mexico relationship is defined only by immigration and the walls, violence, and politics that surrounds it. You probably don’t read much about how Mexico is a valued trading partner and ally, with a long history connecting it to the United States.

The country we know as Mexico is actually the United Mexican States (Estados Unidos Mexicanos), officially adopting the name after it gained independence from Spain in 1821. Its leaders were inspired by the American independence movement, and since the newly independent Mexico was also a collection of states, the name stuck.

2. The first book in North America was printed in Mexico City.

The first printing press in North America began operating in 1539, less than one hundred years after being invented. The press was set up in a house in Mexico City by an Italian named Giovanni Paoli, whose name was later Hispanized to Juan Pablo.

The first book to come off this press was written by the archbishop of Mexico: Breve y más compendiosa doctrina Christiana en lengua Mexicana y Castellana or “Short Compendium of Catholic Doctrine in Both Nahuatl and Spanish.” Unfortunately, no copies of this legendary book survive.

Today, the house where Juan Pablo set up his press, known as Casa de la Primera Imprenta de América (House of the First Printing Press in America), is owned by the national university (Universidad Autónoma Metropolitana) and serves as a Book Museum.

Much has been said about the large immigrant population in the United States coming from Mexico. But did you know that the reverse is also true?

More Americans migrate to Mexico than any other nationality. In May 2019, Mexican official statistics estimated that the US-born population had reached 799,000. That’s quadruple what it was in 1990 and probably still a modest estimate. The US Embassy in Mexico City puts the actual number at around 1.5 million.

4. Many Mexico’s indigenous languages are endangered.

Spanish is the predominant language spoken, written, and taught in schools all over Mexico, owing to its colonial history. But Mexico is an incredibly diverse country, and this is clear from its sheer number of indigenous languages. Only 68 of 143 are officially recognized. Today, more than half are endangered.

It’s vital to save languages because they “are the primary conduit for human culture,” says K. David Harrison, a linguist and co-leader of National Geographic’s Enduring Voices project. – Christine Dell’Amore, for National Geographic, Sixty Languages at Risk of Extinction in Mexico—Can They Be Kept Alive?

Indigenous languages contain generations of wisdom, knowledge, and experience about the environment and the cultures that inhabited it. Losing languages in a land as ancient as Mexico is losing huge, vital chunks of history… not only of Mexico, but of humanity.

5. People from all over the world seek safety in Mexico.

Asylum seekers in Mexico come from all over the world. More than five thousand asylum seekers at the US-Mexico border last year were from Africa—Cameroon, Sierra Leone, Congo, Eritrea, and Uganda. But refugees come from all over the world, including 7,600 Indians who were registered at the border in 2019. Though many hope to cross into the United States, anti-immigration sentiment in the US makes finding safety much harder for refugees.

But for thousands from Latin America—mainly Honduras, Haiti, Cuba, El Salvador, Venezuela, and Guatemala—Mexico is where they hope to settle and establish better, safer lives.

For people in the most violent regions of Central America, the COVID-19 pandemic is making the existing violence and hardship worse. Gangs are using countrywide lockdowns to exert more control over the communities they are terrorizing, as jobs and opportunities vanish with slowing economies.

The need has never been greater at the border. Thousands of displaced people are at extreme risk. We’re on the frontlines, where the most vulnerable people’s lives are beholden to the policies of governments, natural disasters, and health emergencies like the COVID-19 pandemic sweeping across the world.

We are committed to standing with those on the margins. Will you stand with them too? Give today.