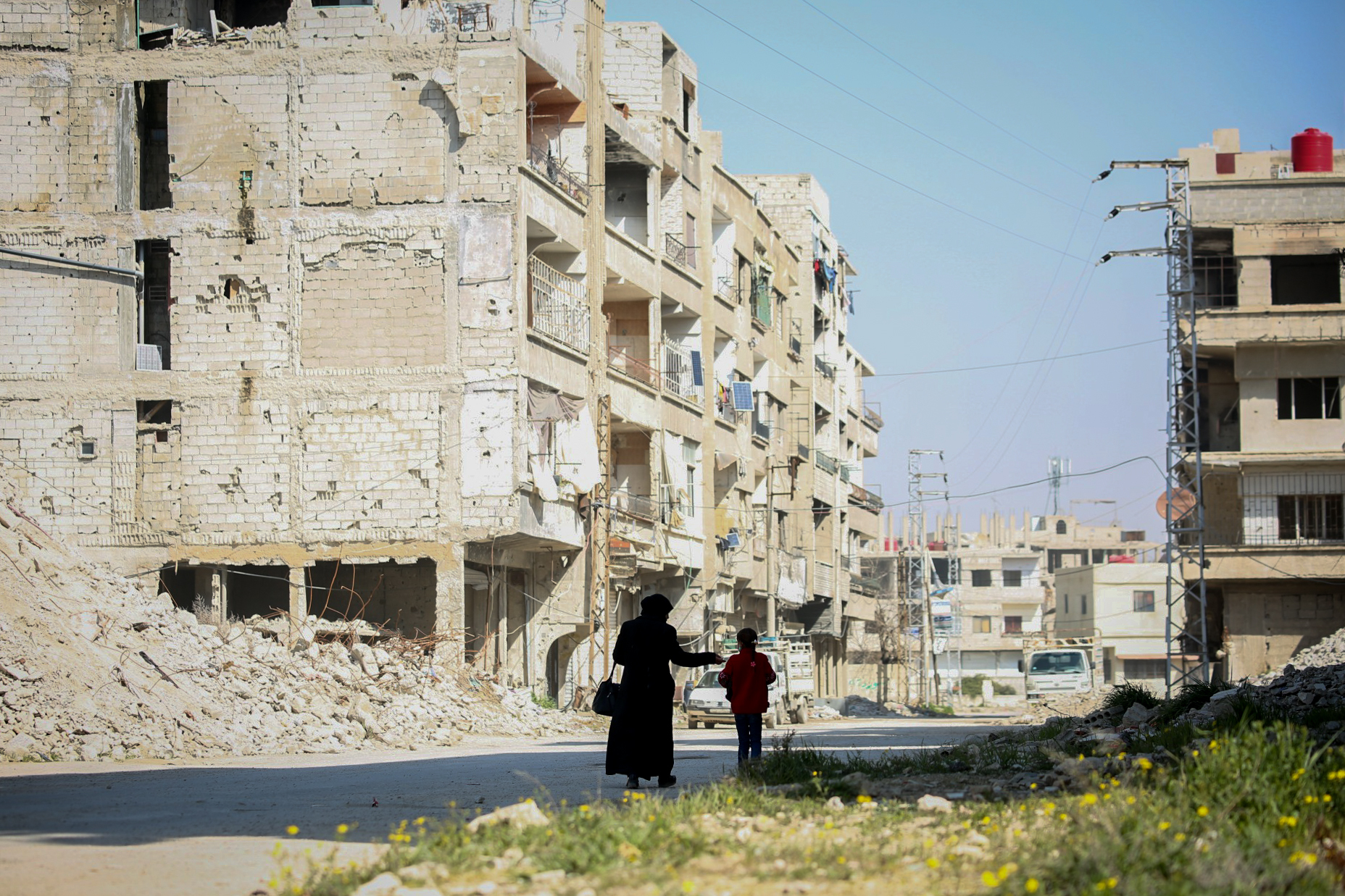 After 10 Years of War, What Comes Next for Syria?

A look at Syria’s future after 10 years of conflict—how the rest of the war could unfold, what might happen after the war, and what our ongoing work may look like.

Nearly 12 million people, more than half the country, forced from their homes—some displaced two or even three times since the war began.

Hundreds of hospitals damaged or destroyed.

A staggering 6 in 10 people at risk of going hungry right now.

And a possible famine on the horizon.

The toll of Syria’s decade-long civil war defies comprehension. A war that was triggered in part by some kids being arrested and tortured for spraying anti-government graffiti onto the wall of their school has spiraled into one of the most devastating spectacles of our lifetime.

There is no easy resolution to this war. No happy ending, waiting just around the corner.

Yet as a community of peacemakers—Syrians, Lebanese, Americans, Europeans— each of us are invited to press in, together. To remember what the rest of the world prefers to forget. To do all we can to stop the spread of violence. To rebuild what can be rebuilt. And to carry the pain and loss of war with our Syrian friends for as long as they have to carry it.

Ten years of war cannot be unmade in a moment. It cannot be swept away with commemorations or resolutions or the occasional intervention. This is hard work. This is generational work. And it’s the work we are committed to as donors, frontline humanitarians, parents, and lifelong learners. All of us. That’s what we mean when we say we’re a community of peacemakers.

We need your commitment.

What is next for Syria? This is not a war where the next stage can be predicted with certainty. No one thought that protests in 2011 would turn into a decade-long war on multiple fronts with multiple actors. No one knows for sure what the next 10 years will hold, either. But here is what may come next for Syria—and how we plan to continue serving here on the ground, helping families survive and rebuild.

How the endgame in Syria has changed

A couple years ago, the Syrian civil war seemed to be moving toward an all but inevitable conclusion. Some 70% of Syrian territory was back under government control. Russian intervention proved decisive in turning the tide of the war. Anti-government forces (not including the Kurdish-led militias that control northeast Syria) were down to their last province: Idlib, where up to four million people are hemmed in, with nowhere left to run.

Then two things happened that altered the endgame:

Both events injected fresh instability—and have almost certainly helped to prolong the war.

Meanwhile, the battle for Idlib has been stalled for over a year. Turkey and Russia, two of the main proxies in this war, announced a ceasefire over Idlib in March 2020. The lines of control have moved little since.

Recent weeks have brought another increase in violence—and the opening of a humanitarian corridor that, so far, no one has dared take the risk of using to flee.

Some believe the corridor is a sign the Syrian government is readying another offensive. Some see it as an effort to bolster the government’s standing ahead of the upcoming presidential election. Giving civilians a chance to escape Idlib before the bombing resumes could be seen by voters as a magnanimous gesture, one that might even win the government votes in historically opposition-heavy areas.

The situation has gotten murkier inside Idlib as well. The militias fighting the Syrian government are often characterized as extremists with links to al-Qaeda or ISIS. And in many cases, that’s true. But in recent years, the dominant group in Idlib, HTS (Hay’at Tahrir al-Sham), has taken steps away from al-Qaeda or any kind of global terrorist movement. They’ve shut down some of the more hardline groups operating in Idlib. They’ve begun to show more interest in governing than fighting. (None of which is to say their hands are clean.)

HTS even tried opening a commercial crossing between Idlib and the rest of Syria, but the plan met fierce popular resistance. It may seem strange that Damascus and its enemies would consider trading with each other. But that’s how dire things are in Syria right now—for everyone.

Syria is quickly running out of what it needs to feed itself. By seeking to trade with their enemies in Idlib, Damascus hoped to tap into a much-needed source of grain.

US sanctions have stymied the flow of even legitimate goods into the country. Syria’s currency is collapsing, causing the price of food and fuel to skyrocket. Imagine paying $200 for a kilo of rice. Or $400 for a pound of beef. Imagine the same fuel you used to buy for $2 now sells for $10. Imagine almost your entire income going to pay for food—and that’s assuming you have one of the better paying (and increasingly rare) jobs in Syria.

There is almost no way to get food into the country, and practically no way for Syrians to get out. Turkey, Syria’s neighbor to the north, has already taken in 3.6 million refugees—and they are determined not one more will cross their border.

The Syrian government is winning the war while the country collapses all around. They’re strong enough to hold on to power, but not enough to reassert full control. So what comes after the war?

There may not be an “after the war” in Syria anytime soon.

It’s entirely possible that Syria will remain in a protracted war, or some kind of stalemate, for years to come.

Syria’s government will claim victory in the election this spring. Despite many reports of voting irregularities, the government enjoys real support from a cross-section of the Syrian population—including much of the Christian minority, who view the government in Damascus as their protector against jihadist violence. There are also, no doubt, many who “go along to get along,” who show up at rallies, who vote the way they’re “supposed” to, whose main goal is to keep their heads down and just get through this.

In other words, barring an unforeseen development, Syria’s government isn’t going anywhere. But it doesn’t have what it needs to pull the country out of the economic death spiral it’s in right now. Unless US President Biden lifts the Caesar sanctions, which he is unlikely to do, Syrians will continue to suffer. A famine caused not by drought or crop failure, but by US policy and Syrian warfare, is imminent.

After 10 years of war, there seems to be no end in sight. Yet at the same time, not every part of Syria is in an active state of war. Some communities are trying to rebuild, while others struggle simply to survive. Perhaps the one question uniting all of them is:

What will stop this from happening again?

Before we distributed our first packages of food in Syria in 2016, we made a commitment that we were not going to abandon this place. Working in a country like Syria takes a certain kind of resilience. You have to keep going, even when it feels like the other side of violence is a long way off. You have to keep pressing in, long after the war obliterates any simplistic notions of good guys versus bad guys. You have to balance the luxury of moral clarity against the moral imperative to help anyone you can, any way you can. You have to keep your focus where it belongs: on the vulnerable, the poor, the families caught up in a war filled with far too many bad actors and not as many clear-cut good guys.

You and this entire community of peacemakers have served millions of meals to families all across Syria. Delivered lifesaving medical care, from Damascus to Deir ez-Zor. Protected thousands from the cold, one winter after the next. Created jobs and launched businesses for those who fled Syria—and for those who stayed, who are working to rebuild their communities and bring their farmlands back to life.

Thank you for not giving up hope.

Thank you for continuing to give and speak up to protect families from the worst effects of war.

Thank you for giving monthly so that other peacemakers can continue to brave the hard spots like Idlib.

We each have a role to play.

The old model of charity is broken—a decade of war with no end in sight has decisively proven that. “Us helping them?” That was never enough to stop the spread of violence, to truly change what needs to change. It just made us feel better.

Let’s keep showing up with lifesaving food and medicine in Syria. Let’s keep rebuilding businesses and revitalizing farms, so families can grow the food they need to stay alive, and so communities can stabilize—so they can heal from the wounds of the last war and have a chance at stopping the next one before it starts.

Let’s continue to speak out against inhumane sanctions that do little to change the course of war, while pushing millions to the brink of hunger. Let’s keep working across every dividing line in Syria—political, religious, ethnic—to build a coalition strong enough to prove that the way things are is not the way things have to be. That Syria can be remade, from the inside out.

Join our community of peacemakers—and help stop the spread of violence.