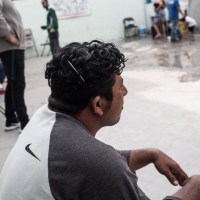 “My favorite movie is The Smurfs,” said Edwin. He had to stop speaking to wipe tears away.

It was the last movie he watched with his kids.

Edwin was a political activist at home in El Salvador. He was forced to flee his country when his life was threatened. Long days and nights on a risky journey to Mexico, facing kidnapping and myriad other dangers… his only other choice was dying.

Much has been said about migrant caravans, coyotes, cartels, and “bad people” making their way to the United States.

Asylum seekers have been accused of bringing violence and drugs and all manner of “evil” across the border. Long before COVID-19 closed international borders, the US was working to curb the number of asylum seekers coming across.

If you’re concerned about what they might bring, or confused, you’re not alone. All over the world, people in relatively stable, safe nations like ours are taught to fear those fleeing war, persecution, poverty. Those looking for a freer, safer life for themselves and their children.

The life most of us have.

Or maybe we’re afraid that somehow, others getting what we have means that we will have less.

It’s not that different from the fear that incites us to grab three packs of toilet paper when one would suffice. To buy all the cleaning wipes and hand soap. We know we have enough, but if others take what’s available, will there be any left for us later?

It’s the same fear that looms large over debates on immigration.

Many Americans look across the border and see nothing but crime, drugs, cartels—and fear what may happen if spills across the Rio Grande.

Not for nothing, either—the violence is real. But the source and the causes of it are often misunderstood.

Cartels battling for access to the booming US drug market have fueled violence throughout Mexico.

Stronger military and police tactics against the cartels have helped fuel the spiral of violence.

Women and children bear the greatest brunt of violence. Domestic abuse, kidnapping, rape, and murder are common in parts of Mexico.

This is the environment in which our refugee friends who fled their homes in Central America now find themselves, waiting for a chance to ask to be let across the border. Most are unable to return home, because what they left behind is even worse than what they now face in Mexico.

They are not bringing violence with them. They’re trying to escape it.

Many of these refugees are from a region known as the Northern Triangle Honduras, Guatemala, and El Salvador. They fled to escape drug-related gang violence. In the 1990s, the US deported thousands of undocumented immigrants, many of whom had criminal records—notably, gang-related offenses—which they brought with them to Central America.

The deportations have continued in recent years. One such wave in 2013-2015 saw about 300,000 Hondurans, El Salvadorans, and Guatemalans with criminal records sent back.

The resulting violence was all but inevitable. Drug gangs are well-funded, well-organized, and well-armed. Their wars have caused thousands to be displaced from their homes, with 265,000 having fled to other countries to find safety, and almost 3 times as many displaced inside their own borders.

For those who head north, many on foot, the journey carries perils of its own. Which brings us back to Edwin.

“I don’t wish it on anyone,” he said, after recounting a nightmarish tale of hardship, kidnapping, and almost losing his life on the journey from El Salvador to Mexico. Edwin was alone, his wife and children back home. Women and children who make the journey face even more danger than he did.

All Edwin wants is to find shelter, to be reunited with his family in a peaceful, safe place. He wants to work hard to build a future for his children—just like the other moms and dads hoping to be admitted to the United States with their kids.

His story, and thousands like it, are what we so rarely hear in the news.

He and thousands of other asylum seekers waiting in Mexico, are not the ones we should fear. In fact, we share more in common with them than we think. They’re afraid of the same violence we are.

According to extensive research from the Cato Institute, a libertarian think tank, immigrants are far less likely to commit crimes than native-born residents. The growth of immigration in the 1990s actually corresponded with one of the sharpest drops in violent crime on US records.

Most of our refugee friends are stuck in Mexico while waiting—hoping—that they will be allowed to cross legally into the US. We are helping where we can, providing shelter and jobs for those who fled extreme violence.

READ MORE: What’s behind the rise in violence on the US-Mexico border?

They are some of the most vulnerable to harm, those who picked up in the night and ran with little more than the clothes on their back, because they faced terrifying violence. Except now in Mexico, they are facing more of the same.

Our friends at the border desperately need your help.

READ MORE: Asylum Crisis on the US Border: Questions and Answers

The asylum process can take years, if it happens at all. Recent changes in policy mean thousands may never get the opportunity to find safety, leaving them in limbo.

Our displaced friends face an uncertain future. But we can help them create a better future right now, where they are.

When you give monthly, you help families fleeing violence to find shelter, jobs, and safety.