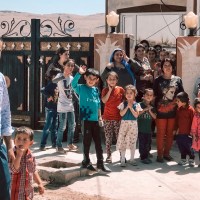 War is not new.

Almost from the beginning of time, it’s been there. Brother rising up against brother, neighbor against neighbor.

The knots of war feel so strong compared to the delicate threads of peace. And so when we look to loosen the ties of war, we have to first look at ourselves.

Because if war is manmade, then it can be unmade… by all of us.

War is not just an “over there” problem. War begins in our heads and hearts, long before it reaches our hands. But that also means the solution can begin with us.

We build peace in communities shattered by war, protecting the vulnerable and bridging the gap between at-odds groups. Community-based peacemaking is built into everything we do.

We reach across enemy lines to change the ideas that lead to war.

To heal the past.

War begins in our heads and hearts, long before it reaches our hands. But that also means the solution can begin with us.

It starts with the next generation, children who have only known war, those children who only know a world divided as us versus them.

It also includes us, right in our own neighborhoods—meeting with those one or two steps outside our circles to learn from each other and pursue peace through action.

We’re creating content to educate aspiring peacemakers and coaching to activate them, so new ideas—those of community, of peace, of opportunity and hope—can sprout among the smallest of us.

We’re building the most diverse community of peacemakers. Because preemptive love doesn’t belong to any religion, identity, privilege, or vulnerability. It belongs to all of us. We don’t have to see the world the same way to value each other. We build community across every dividing line, because we believe there is room at the table for everyone.

We don’t have to agree in order to work to end war. We just need to step forward, together. Join us.