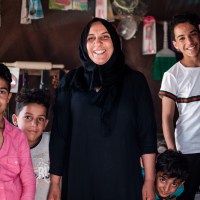 World over, mothers are driven to give their children the best life, and opportunities, that they can.

How do you do that though, when war destroys your entire world? And takes the promise of future away from your children? When you are left you with nothing?

You start again. From scratch.

Suhad’s husband was a soldier who was killed in a battle against ISIS in 2014. Shortly after, Sahud fled home with her kids and came to this displacement camp, along with thousands of others who lost their homes to the same threat.

In Iraq, women aren’t typically the ones who bring income home. But as war claims the lives of men, women have to break with tradition to be the providers.

Suhad has five school-age children to feed at home, and she is adamant that they must be kept in school, so that their futures will be better than hers. She also has a daughter studying biology in university, north of Baghdad. This daughter is a particular source of concern for Suhad.

Iraqi children often live with their parents until they are married. Reputation is everything here: with tribes and communities having multiple, complex connections to one another, news travels fast.

For young, unmarried men and women, their reputation, and by extension, the reputation of their family is what affects almost all aspects of their future: marriage, career, friendships, other relationships, and opportunities. This is especially true for girls and women.

Even mere rumors of societal missteps by women are far less easily forgiven (sometimes never!), so women’s reputations—and by extension, women themselves—are more closely guarded by families. The degree of esteem a woman’s extended family, community and society holds her in, is seen as a success or failure of the men of the family.

Suhad’s daughter lives alone at university, without any family nearby. Suhad is determined to protect her financially, so she will never be lured into relationships she does not want, just to survive. With an education and a good future ahead of her, Suhad’s daughter must be seen conducting herself appropriately in public, especially in a living situation as such as hers—all alone, vulnerable to fall prey to men and women with less than stellar intentions.

This way, when the time comes for her to marry, or take a step forward in her career, no scandal will taint her opportunities. And in a society as connected as Iraq’s, a child’s success is also her family’s future success, and the same is true of failure. The pressure on all is very high.

Suhad wanted a business selling household goods: all the essential and sundry items one needs in the home and kitchen, from spatulas to water bottles to pegs and sieves and brooms. These are items that households constantly need, making the business an eminently sustainable choice.

The shop was off to a roaring start.

On opening day, Suhad sold 50,000 dinar (about $45 USD) worth of items right out of the proverbial gate. That $45 might not sound like much, but it is the approximate weekly wage for many of those in camp, who typically earn less than residents of towns and cities. It’s an impressive taking for one day’s business.

Suhad had to restock not once, but twice in the first week of business, needing to refill the entire shop on the second resupply trip because business has been that good.

It was a great feeling, Suhad later said, to buy her first bottle of propane to fuel her cookstove, with cash, instead of on credit. She is looking forward to paying back all of her debt in very short order, and is incredibly grateful for the neighbors and friends around her, who came to congratulate her on opening day, showing their ongoing support by patronizing her shop.

Life in camp isn’t rosy. In an environment where multiple war-traumatized generations live in crowded tents too close to one another, stresses are high, leading often to strained relationships among family members, neighbors, and sometimes whole communities. So to have such good ties with the whole community around her was a boon for Suhad and her business.

Suhad is an active part of nurturing the community spirit. Suhad’s home and shop have become a welcoming place for any and all.

Helping women is helping the greater community. This is a truth we encounter every day when serving displaced communities.

It’s often gritty, exhausting, and thankless work to be a woman.  But world over, women do the hard work. They love anyway.

Women go the extra mile to ensure the well being of the people around them.

Women lift others with them as they rise.

Thank you for helping our displaced sisters remake home… and the world around them.