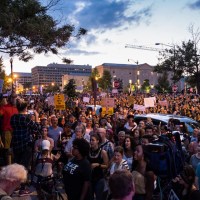 In the wake of the violence in Charlottesville, Virginia, our country feels broken.

But it wasn’t this weekend that broke us. We were born broken. This weekend was just the latest proof of how broken we are. The last several years have been a revelation for many white Americans that bigotry is alive and well in the U.S. Before that, many of us lived in privileged bliss, untouched by racism built into the fabric of our society, unwilling to hear the stories of people of color who experience it daily.

In that vein, we’re sharing four articles from diverse voices about race, racism, and the acts of terrorism and white supremacy that took place in Charlottesville.

You may not agree with every political stance voiced by the authors. But that’s not the point. The point is to listen, to acknowledge and be shaped by their experiences. To hear their voice and perspective. You don’t have don’t argue with their experience… just listen.

This Preemptive Love community includes people of all political perspectives—conservative, liberal, and everything in between. But with one voice, we condemn racism, bigotry, violence, and white supremacy—in all its forms. We condemn racially- or religiously-motivated violence, whether it marches under an ISIS flag, a Confederate flag, or a Nazi flag.

We are grateful to our brothers and sisters of color for boldly sharing their experience and perspective publicly, even though it makes them targets of vicious attacks by those who hate them for their race.

We hope you will join us in listening and learning from them.

This Is Us: Charlottesville is the Ugly Wake-Up Call America Needed

“Race and racism continue to be this great nation’s birth defect: It is our weak link. It is our Achilles’ heel. It is our dividing line…Charlottesville is our wake-up call, America. It’s time to do the work. It starts just like an AA program: The first step is admitting we have a problem.” Read more…

What U.Va. Students Saw in Charlottesville

In recent years, college towns and campuses have attracted divisive figures like Richard Spencer, the white nationalist leader who organized the rally, as youthful activism in the community all but guarantees protest and media coverage. The New York Times reached out to seven University of Virginia students to reflect on the event. Read More…

If you’re tempted to point out that you’re one of the good ones right now . . . please don’t. It’s not about you. Or your feelings. Read More…

My Family is Black and Jewish. Here’s What Charlottesville Means to Me.

Not sure where to go from here or how to respond? Here are a couple of resources for you:

‘We Need Co-Conspirators, Not Allies’: How White Americans Can Fight Racism by Rose Hackman