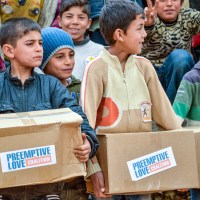 Editor’s note: This post was originally published in April 2017, following a deadly chemical attack in northwestern Syria. It has been updated as of April 2018 to provide the most current picture of our work in Syria.

Over two years ago, we set foot in Syria for the first time, hearts broken by the years-long conflict, determined to respond. In September 2016, many of you took the next step with us as we completed our first emergency distribution inside Syria, feeding 650 families near Aleppo.

You kept showing up as the battle for Aleppo reached a crisis point in December of that year. You funded a feeding center with daily hot meals for thousands in the Aleppo countryside. You provided winterized sleeping bags for those forced to sleep out in the open. You gave food packages for those who couldn’t safely reach our feeding center.

Your work and our presence in Syria have grown substantially since then. You helped launch a second emergency kitchen in Deir ez-Zor, feeding 31,000 people who were besieged and starved by ISIS for three years.

When hospitals were turned to rubble, you sent mobile clinics to the frontlines, mending wounds and treating illness for those who’ve gone years without basic care.

When families started returning to Aleppo, your love went with them—repairing damaged homes and restoring power to an entire neighborhood.

RELATED: Your Impact in Syria in 2017

Your love has been felt in villages hours after they were freed from ISIS control. You’ve helped families get back on their feet after devastating chemical attacks.

You’re showing up for families in eastern Ghouta who’ve endured siege, starvation, and bombardment. You’ve met thousands at a shelter just outside Ghouta with urgent medical care, food, diapers, women’s sanitary pads, and more. You’ve helped send mobile medical clinics into Ghouta to meet the needs of those who cannot or will not leave.

Working in Syria is difficult. We knew it would be, going in. But talking about our work in Syria comes with its own set of challenges.

The situation in Syria is so volatile that with every report, every update, we have to ask ourselves: Will sharing this expose our staff and partners on the ground? Will it jeopardize our ability to keep showing up for families here?

We don’t plan to stop asking these questions anytime soon. The stakes are just too high. Occasionally, there are things we cannot share, for the safety of our teams inside Syria. But wherever we can, we want to give you a closer look at how we’re responding…

1. We serve without regard for which “side” people are on.

It may be stubborn, it may be naive on our part—but we’ve never believed sectarian barriers should limit where we work or who we serve. Syria is no exception.

So if you want to know which side of the conflict we’re on, it’s the side of those whose lives have unraveled in all the violence.

We’re on the side of bombed-out, driven-out, desperate children, mothers, and fathers who’ve lost everything.

2. We build strategic relationships inside Syria, because “coalition” is more than just part of our name.

Syria is not Iraq.

We have a decade-long history in Iraq, one that goes well beyond visiting to actually living among the people we serve here. But even with a deep, sustained presence, we couldn’t achieve all we’ve done without local staff and partners who know the area, know the people, and know the need.

Relationships matter even more in Syria, where we don’t have the same ten-year history of sustained, direct presence to build on. We’ve directly served Syrian refugees for years, but local friends are essential to reaching inside Syria.

This is why we call ourselves Preemptive Love Coalition. It’s part of our DNA. Not just our name.

The only way to serve in hard places is to go in together. It means showing up, and then getting out of the way. It means listening to locals, letting them guide and shape our response.

We could try going it alone… and most likely fail. Or we could lean into what our friends on the ground are already doing, join them where they are, invest in their capacity, and exponentially grow their reach.

That’s what you’ve done in Syria—feeding families in Aleppo and Deir ez-Zor, repairing bombed-out homes, rushing urgent medical care to the frontlines in Ghouta, and more.

For security reasons, we can’t always identify our Syrian friends by name. But they are part of this coalition all the same. We see them as an extension of our team—because that’s how they want us to see them. “Let us be one team with two bodies,” as one of them told us.

We can’t imagine any better way to work. 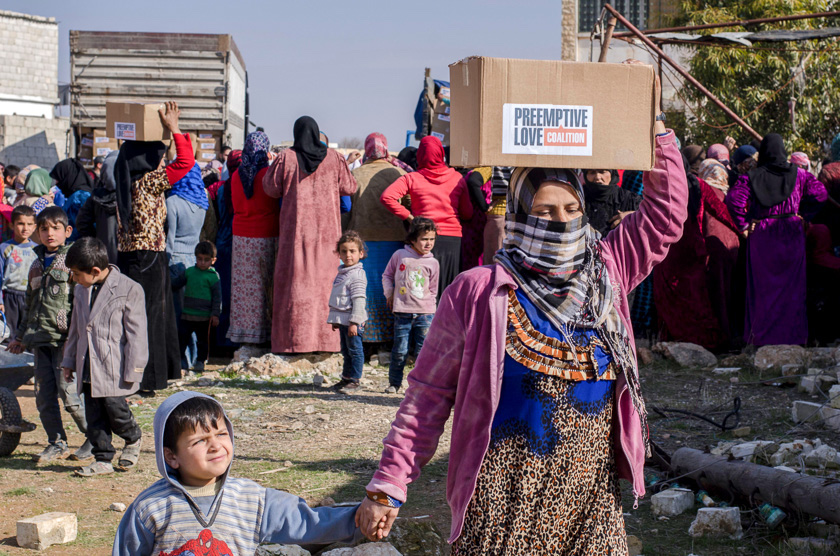 3. We show up with our own bodies.

But presence matters, showing up with our own bodies.

We work through strategic relationships and we have staff on the ground. For us, it’s not an either-or. Preemptive Love staff in Syria monitor and report on our programming, identify needs, and listen to the families you’re serving.

The situation is highly volatile, and the work is risky. We’ve had close calls in Syria, as we have in Iraq. But we believe in the power of showing up.

As we expanded our response in Syria—reaching more and more, being first in and last to leave wherever possible—we also want to grow our presence. To be in it with and for Syrians, to show solidarity with our words, actions, and our physical presence. 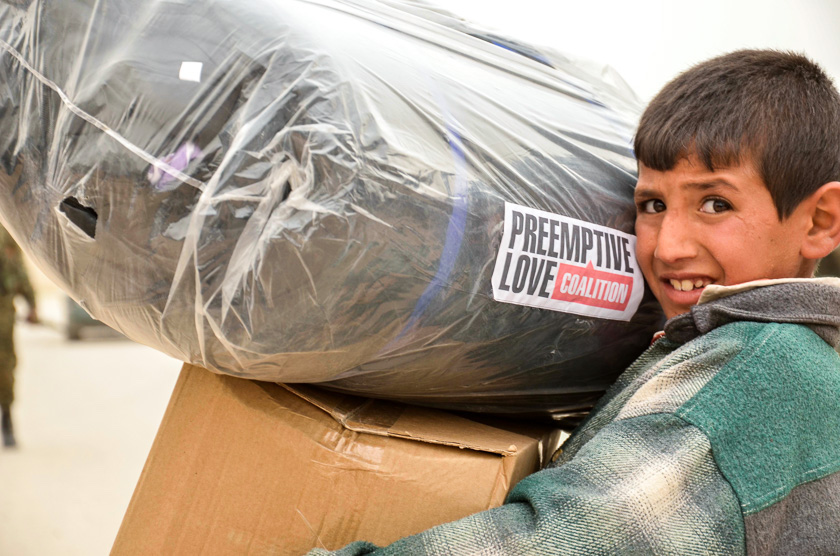 Syria is hard. It’s messy. Complicated. But that’s never stopped you from showing up before.

You are reaching thousands of families, giving them what they need to hold on in the middle of the world’s most violent conflict.

But this conflict is far from over. Even after the last bomb drops, the needs left by years of war will be enormous. Which is our response—our presence, our commitment to Syria—is also far from over.

Please consider joining us for the long haul by becoming a monthly sponsor. Our sponsors make bigger and longer responses possible because we know we can count and their steady support. Syria needs that now, more than ever.

We must continue to show up, meet urgent needs, and help people unmake violence and remake their world. “We” meaning all of us, and all of you, and all our friends in all the hard places. We are in this together.