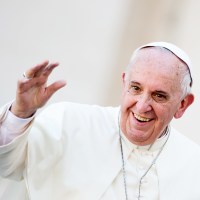 There have been Christians in Iraq for nearly two thousand years. Ever since Thomas and Jude, two of Jesus’ disciples, came with friends to the land now known as Iraq in the first century, followers of the Christian faith have been living and worshipping here.

Later this week, for the first time, the head of one of the major branches of Christianity, the Catholic Church’s Pope Francis, will visit in a historic trip centered on peacemaking.

The stories about the Garden of Eden and the very first people? Believed by many to be here in Iraq.

The prophet Jonah, spit up from the belly of a giant fish before he went to Nineveh? On modern maps, Nineveh lies on the outskirts of Mosul.

The prophet Ezekiel? He, his wife, and a number of others from Judah were exiled to Babylon, which is in modern-day Iraq.

The prophet Nahum? Believed to be laid to rest here.

And then of course there is the man who most directly connects these three faiths that nearly 60 percent of the world’s population follow—Abraham. Abraham’s hometown of Ur is located in southern Iraq, and it is one of the stops planned for Pope Francis’ four-day trip.

A People in Peril

Numbers first began to plunge after the US invaded in 2003, and the sectarian war that followed. In 2014, the Christian community in Mosul and surrounding areas came under attack from ISIS. While ISIS didn’t immediately target the Christian community as they did Muslim Shias and Yazidis, the Nasrani, or Nazarines (as Christians are sometimes called here) were forced to pay large taxes if they wanted to stay. Eventually, they were forced out altogether.

Events of the last few decades have displaced many in the Iraqi Christian community, with their homes destroyed, wealth stolen, and feeling like there is nowhere here they will be safe and protected by their neighbors. Many young Christians in particular don’t see a future in Iraq. The struggling economy isn’t providing the jobs they need, and shrinking communities can’t offer potential spouses. Given the chance, many young people are deciding to emigrate out of the country, making the likelihood of survival for the community here even more remote.

In light of all these challenges, there is palpable excitement for Pope Francis’ visit. And not just among the Christian community. Iraqis of all backgrounds are proud to host the pope in their country. The importance of this visit isn’t lost on anyone.

The itinerary for this trip is keenly focused on opportunities for leaning into peace. Among the planned stops, the pope will visit Christian sites marked by tragedy—like Our Lady of Deliverance cathedral in Baghdad, where 58 were killed in a 2010 massacre claimed by the terrorist group al-Qaida; and Mosul’s Our Lady of the Hour church, destroyed by ISIS.

He will visit places that are sacred for Christians, Jews, and Muslims alike, such as Abraham’s hometown of Ur in southern Iraq.

And Pope Francis will go to Najaf, one of the holiest cities for Iraq’s Muslim Shia community, to visit Grand Ayatollah Ali al-Sistani. Al-Sayyed Al-Sistani is the most important Shia cleric in the country, as well as one of the leaders who has had the most political influence. It was one of his rulings several years ago that led thousands of men in southern Iraq to volunteer to fight against ISIS. He also stood with protestors who took to the streets in 2019 in an attempt to secure their rights.

When asked about the pope’s upcoming visit, Al-Sayyed Al-Sistani was nothing but welcoming, and said, “You are part of us, and we are part of you.”

An event this momentous draws criticism as well. Infectious disease experts are warning against the trip, sure to attract huge crowds. After a dip, the number of COVID-19 cases in Iraq is rising again, fueled in part by spread of the newer, more contagious strains. There are real concerns that these events could prove dangerous for those who come to see the pope, as well as the pope himself (who has received the vaccine).

Who Pope Francis visits (and who he doesn’t) has become fodder for local and regional politics here in Iraq. This was inevitable, as a trip so short can’t possibly accommodate every opportunity.

There have also been a number of bombings and rocket fire in the capitals of Iraq and its Kurdistan region by militia groups in the past few weeks, surely intended to make Iraq seem dangerous and unwelcome to the pope and foreign visitors.

Whether you have a connection to Catholicism, or to any religion at all, there is much to learn from this trip. From acknowledging tragedy in a way that brings solace, to reaching out to a community some say should be “the enemy”, Pope Francis is committed to building bridges between faiths, countries, and neighbors. He is choosing to stand with not only his own Christian brothers and sisters, but all of Iraq’s people.

May we all do the same in our own circles and communities today and every day.

For nearly five years, Preemptive Love has served communities of all faiths in and around Mosul, including our Christian friends—with lifesaving relief during and after the war with ISIS and, more recently, with jobs and new businesses that help communities rebuild.