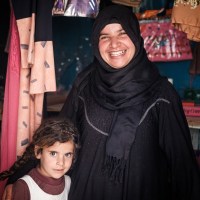 When a pandemic spreads, your first task is to contain it. To stop the spread, as close to ground zero as possible.

When war breaks out, our first response is to show up—with lifesaving relief, as close to the frontlines as possible. To try to contain the effects of war on the most vulnerable.

But containment alone cannot stop the next pandemic. Or the one after that. And it can’t stop the disease of violence, either.

What reduces the risk of war like nothing else?

An Oxford University study on the economic causes of civil war found the effects were decisive: higher income dramatically reduces the length and likelihood of war. “Civil war is overwhelmingly a phenomenon of low-income countries,” they concluded.

Flourishing communities have more to lose—and less to gain—by going to war. When opportunity is abundant, sectarian groups, otherwise at odds with each other, can achieve more through mutually beneficial cooperation than violent competition. And when the machine of war isn’t the only game in town offering young men a way to earn a living, another future becomes possible.

That’s why we don’t just provide help fast on the frontlines of conflict. We stay as long as it takes to see families thriving to see communities rebuilt.

We give help that lasts, so families can provide for themselves. Capital to start new businesses. Coaching to help businesses thrive. Connection to the global digital marketplace. Because whole families, whole communities, reduce the possibility of war.

When people have the jobs they need, the risk of violence fades.

Small businesses strengthen local economies. They help whole communities bounce back from violence. They can even help stop the next war from happening—by strengthening households, giving young men another choice besides fighting, and providing everyone hope for the future.

We help refugees start their own businesses, from grocery stores and welding shops to bakeries and butchers. We organize makers’ co-ops so they can leverage skills they already have—making soap, knitting, farming, and more. And in cities across Iraq and on the US-Mexico border, we’re developing the workforce of the future, providing tech training and job opportunities for young people affected by violence.

Empowerment can’t be mass-produced. But each new job, each new business, can have a ripple effect, transforming an entire community.

So they can have a purpose and an income. So they can remake home and rebuild their communities. So those wounded by war can take their own steps to end war, right in their own neighborhoods.

Give now to create jobs for refugee families.