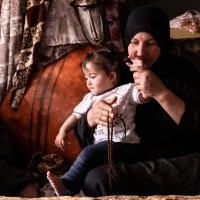 “To be called a refugee is the opposite of an insult; it is a badge of strength, courage, and victory.”

Imagine living in a world ravaged by war.

The safety of home has been replaced by terror—everything familiar is turned upside down or completely destroyed.

You’ve become a prisoner in your own home.

You haven’t stepped outside your basement to see what’s left of your neighborhood because you’re afraid your family will be discovered and harmed — maybe even killed.

Your children can’t go to school. You can’t do simple tasks like going to the grocery or mowing your lawn. Worse, you can’t even go to work to provide for your family.

It’s difficult to imagine, isn’t it?

According to the UN Refugee Agency (UNHCR), 25.9 million people were forced to make this choice in 2018.

That’s the largest number of refugees in history.

Once they escape the dangers of home, they spend months—even years—going through the vetting process required to stay in the place the UNHCR has recommended. (They don’t get to choose to go just anywhere.)

And, while they wait, there’s the challenge of integrating into a new culture, finding a way to support their family, learning a new language, overcoming loneliness, and enduring the skepticism of people around them.

Unfortunately, for many of us, there’s a fundamental misunderstanding of who refugees are and why they left home in the first place. We don’t know them or their circumstances, so we take at face value what we hear on the news and often, unfairly label them as unworthy outcasts who don’t deserve to be a part of our society.

While we can try to empathize with their experience — which is so far removed from our own — it’s impossible to really understand.

What we can do is remember that every refugee we encounter is a living, breathing human being with a unique story. We can take the time to get to know them, learn their stories, and share our own.

Refugees are some of the strongest, bravest people we can have the privilege of knowing.

Their stories are an inspiration and a testament to the amazing strength and resilience of the human spirit. There’s no better way to give you a glimpse into who they are than to share their perspectives in their own words.

Regardless of what they’ve been through, the thing that inspires us most about the refugees we’ve had the honor of serving is their ability to turn devastation into something beautiful. To take what was meant to destroy and use it for good.

The life of a refugee, even one that’s part of a family, can be a terribly lonely road. We may not be able to carry the burden for every single one of them, or fix everything, but we can come alongside them, and love anyway.