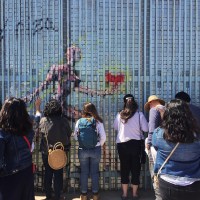 Shelter, safety, stability: vital ingredients to ending violence—whether in the Middle East, where we’ve served for over a decade providing relief and jobs, or in Mexico, where thousands of the most vulnerable people in the world are seeking asylum in the United States.

Most fled violence in Central America. They’ve endured incredible danger on their journey, only to shelter in unsafe, unsanitary conditions while they wait for a shot at a better life.

Recent changes in US asylum policy have made that shot—already a long one—even longer still.

The “Remain in Mexico” policy—formally, the Migrant Protection Protocol—is an immigration policy put in place in late 2018 by the US government. There has been much debate and division, mostly along partisan lines about this policy, and the broader issue of immigration.

The policy was put in place by the Trump administration primarily to curb illegal immigration at the southern border. However, the majority of migrants and refugees who cross the do so legally in order to request asylum.

This means that asylum seekers who arrive at the US-Mexico border must now wait until their claims are processed (and approved) before they are allowed to cross the border into the United States. This process can take weeks or even months.

How is it different from the asylum process before?

Previously, asylum seekers could legally (or illegally) cross the border from Mexico, declare themselves to Customs and Border Patrol agents, and be sent to a detention center to have their claim processed. This is no longer the case under the Trump administration, which is making US asylum policy increasingly restrictive.

The current government is “metering” or limiting the number of people who can be processed at a time. That number is small: according to the New York Times, about 40 to 100 claims are processed a day. Everyone else has to wait their turn in Mexico.

With an estimated 60,000 asylum seekers waiting in Mexican border cities at the end of February this year, the wait was already stretching into months, if not years—before taking emergency COVID-19 measures into account.

Who is affected by “Remain in Mexico”?

Currently more than 66,000 asylum seekers are affected by this policy. Namely, refugees who travel through Mexico to claim asylum.

People who do not need to travel through another country to reach the US (e.g. those who are Mexican-born) are not affected. The number of affected asylum seekers will grow as refugees continue to flee poverty and violence in their home countries.

Why are asylum seekers coming to the US?

There are people from much further away like Uganda and Cameroon, who are traveling through Mexico to find safety in the United States. But most come from El Salvador, Guatemala, and Honduras—a region known as the Northern Triangle. Today, the Northern Triangle is the most violent part of the world not in an active state of war.

The main reasons that many flee are staggering violence, much of it gang-related: being extorted for money under the guise of protection, removing themselves and their children from the danger of being kidnapped and tortured, recruited or killed by gangs.

But gang violence is only a part of the bigger picture, and one of the by-products of widespread corruption, which has caused a downward spiraling economy, and no economic future for ordinary people.

Most come to the United States for the same reasons many of our ancestors did: safety, opportunity, and a better life. People from this region are among the most vulnerable in the world, and leaving home is a last resort, and the only option to keep their families alive.

What is happening to those who are affected?

Asylum seekers are stranded in Mexico. They undertook an extremely dangerous journey (many traveled thousands of miles on foot) to find safety from the crime-ridden communities that they fled from.

Related: What’s The Difference Between a Refugee, a Migrant, an Immigrant, and an Asylum Seeker?

Most will wait for years in limbo for their claims to be processed, and 60%–80% will find their claims denied. They’ll spend this time in cities rife with the sort of violence they tried to escape: gang violence, kidnapping, rape, torture, and murder.

Hostility toward asylum seekers is increasing as more people come to these cities, stretching their resources and infrastructure. Some have managed to find space in shelters and rented homes, but thousands live in tents in makeshift “camps,” where conditions are unsanitary and unsafe.

And most of them are families.

“Harsh” is a grave understatement of a heartbreaking situation.

In March 2020, the US government announced that, through April 22, legal hearings for asylum seekers in Mexico will be rescheduled. And on April 21, President Trump announced a 60-day ban on all immigration applications for permanent residency.

With emergency measures now being implemented along the US-Mexico border—closing borders to non-essential travel, halting asylum claims processing, and increasing deportations across the border—it’s likely the wait will be much longer. How much longer is hard to say, as long as the COVID-19 pandemic and economic situation continue to unfold in the United States.

Asylum seekers and those unable to find adequate shelter are some of the most vulnerable to COVID-19.

Few (if any) can practice precautionary measures advised by governments: social distancing, frequent hand washing and sanitizing, and staying home. Without homes or access to vital healthcare, these refugees are the forgotten millions that most governments do not or cannot take into account.

How can you help?

Last year, you made sure 1,500 asylum seekers in El Paso received backpacks of essentials to get them through their first days in the United States.

As COVID-19 created shutdowns in Mexico, you’ve provided food to our shelters, so no one goes hungry in quarantine. And you have provided hundreds of tomato seedlings—food that can be eaten or sold, providing food and income.

But these families, and so many more who continue to come to the US-Mexico border, still need help.

Safety starts with a real roof over their heads. With jobs and training for parents and young adults. With the assurance that there will be food on the table for the next meal, and all the ones after that.

When you give monthly, you help families find shelter, health, and jobs. Give today, for a better tomorrow.