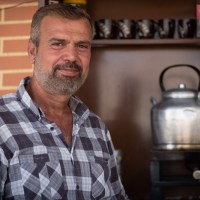 Sitting in Ammar’s shop, sipping on small, sweet cups of tea, you could hear the inner workings of the city of Mosul if you paused a minute to listen. Ammar was strategic when he chose the location of his business: next to government offices, a bank and a mosque; nearby two densely built residential neighborhoods; and at a major intersection. A man with keen business instincts, Ammar made sure his coffee shop, which he ran for 14 years, had high visibility and a great reputation.

That was before, of course. Before ISIS. Before ISIS ideology changed the social life of the city. Before the war to liberate ISIS left so much of the city a pile of rubble.

Ammar points across the street to where his café used to be. There is nothing there now. Scanning the block, the late afternoon sun reflects off of broken concrete and plaster in three directions.

Sipping tea at Ammar’s new مقهى –his street-side café opened with a small business grant you provided, across the street from his original shop–you get the perfect view of what Mosul was, and what Ammar believes it will be again.

Slap! Slap! Slap! Iraqis are serious about their dominoes. Tiles are slapped down hard onto the plastic-topped table with a conviction that’s intense. The game moves quickly, ivory tiles slid into place after rapid calculations are made.

Within a few feet of where the game unfolds, an air conditioner blows a bit of relief past the players; Ammar works at his trade, making hot beverages for a reasonable price; and a large thermos stocked with icy drinking water sits nearby in the shade for any passersby who can’t afford to buy tea.

When Ammar first reopened his shop, he had to haul every bit of drinking and wash water by hand to this site, because there were no water services here. He didn’t wait for the infrastructure to catch up to the neighborhood’s needs. He needed to provide a living for his family, and he wanted to be part of the city’s renewal. And for him that meant providing a place to gather, talk, and play a game of dominoes—forbidden under ISIS rule.

It will take a long time for this neighborhood to rebound. Ammar is under no illusion that it will be quick like a game of dominoes. But he’s a patient man. He provides respite to passersby, to the early returnees to the nearby residential blocks, and to those who come to pray at the mosque next door.

Investment in small business grants in places recovering from violence isn’t magic. Their success isn’t a fluke. Rather, it’s an informed decision to walk alongside those who have the vision to see that their success is directly connected to the success of their community.

Help rebuild communities, one business at a time. Give now.