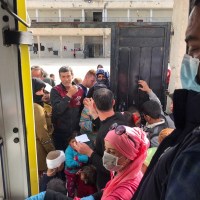 Military forces announced they’re opening a humanitarian corridor in Idlib, Syria, allowing families here to escape. Thousands are expected to flee. But how many and how fast—and whether they have anywhere left to go—remain to be seen.

We are already on the ground in Idlib, with a mobile clinic positioned to meet families as they escape. We are ready to provide medical care and food they can eat now.

You can give to help families on the run. When you give, a family on the run gets the food and medicine they need to survive. When you give monthly as a member of our community of peacemakers, you ensure that families have what they need not just to survive, but to rebuild.

If you want to know more about what’s going in Syria and our response, keep reading below.

What is a humanitarian corridor?

A humanitarian corridor is a demilitarized passageway that allows civilians to leave a conflict zone or permits aid to get in. They can be established by one or more parties in a conflict. In past conflicts, some corridors have been maintained by the United Nations.

In this case, it’s an escape route meant to allow families to leave parts of Idlib currently controlled by various militant factions. By some estimates, more than 4 million people are trapped inside Idlib. Many fled from other parts of Syria as they were recaptured by government forces. For some, this could be their second, third, or even fourth time running for their lives.

The ominous side of humanitarian corridors

In Syria, humanitarian corridors and temporary ceasefires are often precursors to major escalations in violence. To another wave of bombings—even, in some cases, alleged chemical attacks. Spring in this part of the world has always been the time when the engines of war ramp up again, after the relative quiet of winter.

Syrian forces have been slowly clawing back territory for years. Idlib, a province in the northwest where this humanitarian corridor is located, is currently split in two: roughly half of it under the control of militias—the largest and strongest of which was, at one point, linked to al-Qaeda—and the other half back under government control. Idlib is, in many ways, a ticking time bomb. The violence here has never really stopped in nearly 10 years of war. But what many fear most is the battle still to come. The one that may erupt any moment: the battle for final control of all Idlib.

In part, this depends on how many people use the humanitarian corridor to leave—and where they go next. It depends on whether families can safely reach the corridor, whether they will be allowed to leave in the first place. If those who live relatively close use it to escape first, that may encourage others who live deeper within Idlib to do so.

In fact, a similar corridor opened in Idlib around this time last year—the front lines have moved little since then. Thousands of people fled at the time, and expectations are that thousands will try to escape this time as well.

Another important question is where they will go once they leave. Some families may have somewhere else to stay in another part of Syria. But again, for many this may be the second or third time they’ve had to flee war. They may have nowhere else to go. If a large number of families remain in the area, waiting for shelters to open here, they won’t just need help for a day or two. They’ll need ongoing help to survive and provide for themselves—until it’s safe to go home.

Our mobile clinic is positioned near the corridor now, staffed with two doctors, two nurses, and a pharmacist ready to meet people’s most urgent medical needs. We are preparing ready-to-eat food packs—so whether families journey on from here or wait for whatever is next, they have something to sustain them.

It is likely that many from Idlib have not had access to reliable information about COVID-19. So we’ll work to educate families on measures they can take to protect themselves. We’ll provide handwashing and sanitizing stations at our clinic. Depending on how long families stay in the area, there may also be a need for hygiene supplies—sanitary pads, diapers, and more.

It’s too early to know how big the need will be, but we are ready to meet it.

But when we show up together, we show our friends fleeing war that they matter. That we won’t let violence fester while people starve.

We are fast in a crisis. We’re on the front lines. We’re responding. Will you join us?

When you give, a family on the run gets the food and medicine they need to survive. When you give monthly as a member of our community of peacemakers, you help us stay for as long as we are needed. You ensure that families have what they need not just to survive, but to rebuild.