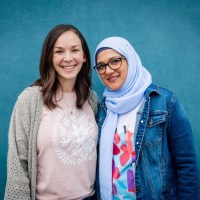 When you think about the people you see on a regular basis, the people in your circle, those you meet for playdates or coffee, do they all look like you? Do they believe what you believe? Do they come from the same background?

Anna, a Christian and a pastor’s wife, had been wrestling with these questions. She wasn’t satisfied with the homogeneity of her relationships. She wanted a change for her family, her kids—for them to know the beauty and value of different cultures, races, and ethnicities. In the fall of 2016, unsettled by the divisive and inflammatory political rhetoric engulfing the country, Anna was moved to take action.

In the same Florida town, Saadia, a Muslim-American, was also grappling with the results of the election. She felt fearful, isolated. Depressed and frustrated, she decided to use her forgotten gym membership to get out of the house and do something productive.

Saadia had just finished her Zumba class when Anna approached her.

“I just wanted to see how you’re doing with everything that’s happening in the world today, I’m sure it’s got to be hard and I just want you to know you’re not alone. I’m standing with you.”

The two cried and hugged, then began to talk. Anna shared her desire to start a group for women from different backgrounds, offering a safe space for conversation and connection.

“Let’s do it. We’ve got to do something,” Saadia affirmed. They decided to gather their friends and lead a group together. They called it “Women in Solidarity.”

The beauty of our shared humanity doesn’t mean we lose our unique identities.

As their first meeting approached, Saadia and her Muslim friends felt nervous. “Is it going to be weird? What if it’s uncomfortable? Will they try to convert us?”

They weren’t sure what to expect.

Anna notes that the aim of the group is not conversion. It’s not to convince someone or to win an argument. Their focus is to nurture reconciliation and relationships across dividing lines. “It’s about all of us, jointly growing together, understanding each other, growing in empathy and working toward peace.”

At the first meeting, Saadia and Anna asked everyone to sit with someone they had never met before and to learn five things they had in common.

“Look, we’re human. We do a lot of the same things,” Saadia told them.

The room quickly filled with chatter and laughter as the women began to connect.

That was the first step. The group decided to start meeting regularly.

We may look different, believe differently, but we’re friends and we value each other and we’re committed to peace together.

It’s not always easy—they have no illusions about that. “It’s hard to intersect lives,” Anna says. “It takes a lot of intentionality to maintain and pursue those friendships that aren’t naturally in the same places.

“We respect each other, but we don’t have to agree on everything to know peace is possible. We want to work toward peace in relationship, face-to-face. The beauty of our shared humanity doesn’t mean we lose our unique identities.”

Saadia sees that day in the gym as a pivotal moment in her life. She recognizes the courage it took for Anna to approach her—and her own bravery in responding. “I could have said thank you and gone on my way… But that day I needed someone to say something to me and I needed to respond back.”

Anna, too, is grateful for the way Saadia responded. “I’m so thankful for the friendship with Saadia. I wanted the way we lead it to show the way: that we may look different, believe differently, but we’re friends and we value each other and we’re committed to peace together.”

Saadia and Anna are standing on the frontlines in Florida, pursuing peace through relationship, reaching across dividing lines. They are taking small, brave steps, widening their circle, choosing to see the “other” as a friend, a neighbor, a partner in remaking the world.

And we can too—all of us.

This year, take the first step to healing all that’s tearing us apart.