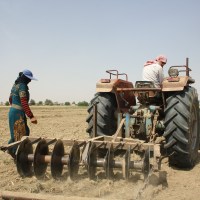 Violence. Bombings. Lives and communities destroyed. We know the visible scars of war—the ones that mark our psyches and cities. We think we know what causes war: personal battles that become political, and eventually spill over borders of all kinds.

What we don’t think about nearly enough are the wider pressures that can lead to war——the seemingly disconnected, unrelated pieces that suddenly trigger mass unrest and violence.

These are real changes that affect more than just the climate. They affect people. They affect where people are able to live, and how they share resources and provide for themselves. They impact people’s ability to stay and farm their traditional lands, until they are forced to move somewhere more hospitable.

Changes in climate—like rising temperatures and receding farmland in Syria and Iraq—they impact the earth, yes. But they also impact the people who live here, which can lead to conflict between neighbors.

Those who live downstream from a dam in a neighboring country, for example, often lose their traditional way of life and livelihoods, along with their water supply. Those who tend sheep in marginal grasslands, overgrazed and turned into desert, often find themselves in conflict with neighbors for precious, dwindling areas of grassland. And those who have to leave their land and find new work often land in overcrowded cities with too little resources and opportunity already.

Trying to ensure your community has what it needs to survive—that’s enough to turn conflicts over disappearing resources into all-out war.

But it doesn’t have to be this way.

We exist to end war. And for this vision to have a chance at becoming reality, we have to set our sights on the climate-caused problems that lead to war.

There is no one-size-fits-all solution to these problems. Instead, we invest in a range of hyper-local solutions, like co-ops and community gardens for those who no longer own land or tools because of war. We work with displaced farmers and shepherds, helping them return to their lands where possible. Where land is scarce or it’s too dangerous to return, we look to rooftop greenhouses and in-home mushroom farming—so families have what they need, right where they are. And in every case, we prioritize the vulnerable, those most likely to be affected by violence and recruited into it.

We’re already doing this in Mexico, Syria, and Iraq. But this is only the beginning. We’re seeking out local experts so that we can devise new land management models and reclaim grasslands from the desert. We’re looking for families we can partner with to start gardens, helping them grow the food they need right at home. We’re dreaming up closed-loop ecosystems.

Before violence can even start, we’re planting the solutions to end war.